There was enough snow Friday evening to impact roads, and freezing temperatures can cause hazardous driving conditions for both Saturday and Sunday morning.

CHARLOTTE, N.C. — A storm system moved through the Carolinas, bringing roughly 1-3 inches of snow and wintry precipitation with it.

Since low road temperatures caused the snowfall to stick on contact, this will create slushy spots and black ice conditions in some areas. NCDOT urges drivers to stay off roads and avoid slick conditions.

All of the snowfall for our area is over, and the system moved off the coast of North Carolina Saturday morning.

Friday afternoon, the National Weather Service extended a Winter Weather Advisory to Charlotte and the I-85 corridor. That has since been canceled.

🌩️ If you like weather, watch Brad Panovich and the WCNC Charlotte First Warn Weather Team on their YouTube channel, Weather IQ. 🎥

RELATED: What is black ice and what to do if you hit it

How much snow did we get?

The Piedmont saw roughly 1 to 3 inches with the highest totals further south and east. Wadesboro, NC has the highest preliminary snow in our area with 4 inches.

There have been multiple reports of 3 inches or more in Cheraw, SC, Chesterfield, SC and Kershaw, SC.

Here are my updated preliminary snowfall totals from highest to lowest 🌨️🌨️

Although roads are still dicey, a snow event is MUCH better than an ice event. Be safe! @wcnc pic.twitter.com/7ECyNSmxnR

Saturday: The coldest morning since late 2020

Saturday morning brought forth temperatures in the teens in the Charlotte area. Wind chills were also low Saturday morning, with a wind chill of 11 degrees recorded near Charlotte Douglas International Airport.

The temperature dropped to 19 degrees at Charlotte Douglas Airport. This makes it the coldest morning since late 2020.

All snow was be done before sunrise Saturday.

Charlotte did get some light snow Thursday night, but the area saw much heavier snow Friday evening compared to the brief snow many saw in the greater Charlotte area Thursday. 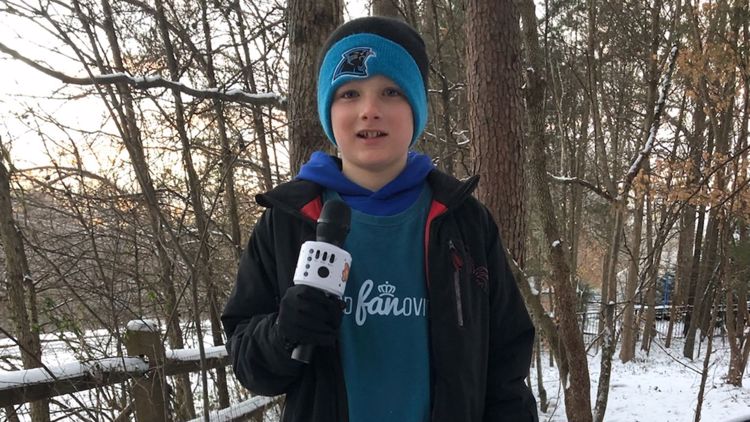 The good news is the weekend will be pleasant, despite the cold temperatures. Saturday began very cold, in the upper teens and 20s, before warming up to a balmy 41 degrees.

Sunday will also start cold in the lower to mid-20s but it’ll practically feel like spring, with forecast highs in the mid-to-upper 40s for the Charlotte region.

“It’s going to be a decent weekend, but it’s going to be an icy start,” WCNC Charlotte First Warn Weather Chris Mulcahy said. “Things will thaw out, but don’t warm up, but at least you’ve got the power of the sunshine during the afternoon to make it feel a little bit better.”

🌩️ If you like weather, watch Brad Panovich and the WCNC Charlotte First Warn Weather Team on their YouTube channel, Weather IQ. 🎥

Gov. Roy Cooper declared a state of emergency Wednesday ahead of the storm, as did South Carolina Gov. Henry McMaster. Those declarations give both states the ability to mobilize more resources to areas impacted by the storm.

Wake Up Charlotte To Go is a daily news and weather podcast you can listen to so you can start your day with the team at Wake Up Charlotte.
SUBSCRIBE: Apple Podcasts || Spotify || Stitcher || TuneIn || Google Podcasts

All of WCNC Charlotte’s podcasts are free and available for both streaming and download. You can listen now on Android, iPhone, Amazon, and other internet-connected devices. Join us from North Carolina, South Carolina, or on the go anywhere.