As Colts defensive tackle DeForest Buckner arrived at Eagle Church in Whitestown, Ind., during the bye week of the 2021 season, he had no idea who might join him for his special day.

He knew his family would be there, his wife, Ashlyn, of course, and their two small children. He thought some of his new Colts teammates might make it up there; word had gotten out that Buckner was going to be baptized that day, and several players from Bible study figured to show up — and did.

He then looked out and saw the face of a man he never expected to be there.

This shouldn’t have been a complete shock. Reich is a man of enduring faith, having served as a pastor at the Ballantyne Presbyterian Church outside Charlotte, N.C., for several years after he retired from a playing career in the NFL. He is close to all his players, but to see his star defensive player proclaim his faith, something that’s incredibly important to both of them, well, this was something he couldn’t miss.

Buckner was shocked. And grateful.

“Honestly, it meant a lot — a lot,” Buckner said recently. “It showed me it was more than your normal player-coach relationship. It showed me how genuine (Reich) is and how much he really cares about us as men off the field. Since that time, our relationship has just continued to grow and deepen. I thank him a lot because it changed my perspective: It’s always been player-coach, especially in the NFL, but he’s the first coach I’ve ever had since I’ve been in the league who showed the real, genuine side of himself.”

Most coaches maintain a purposeful distance between themselves and their players, and maybe that’s necessary, to a point. Let’s just say it’s hard to imagine Bill Belichick showing up in a church on the far outskirts of town to celebrate a player’s public declaration of faith. But Reich, for better or worse, is different — especially when it comes to religion, which has been the foundation of his life since his senior year at the University of Maryland.

“It was the right thing to do,” Reich said. “It was a show of support for Buck. The respect I have for him is immense. You know, getting baptized is a big step, a public step. It’s more of a public declaration of ‘hey, I’m taking a stand,’ and I support him in that.

“Honestly, it was one of my highlights of my four years here (in Indianapolis) — a definite highlight. And a couple of us got to share some words of encouragement, so it was a special time. He’s a man of integrity. I love his integrity, his work ethic. I love who he is as a person. He’s a man amongst men, a leader among leaders. Put a bunch of leaders in a room, and (if) he’s in the room, he’s going to be one of the guys leading the pack.”

Since then, the two have developed a deeply personal and spiritual relationship that has grown since that day at Eagle Church, where Buckner was baptized by Pastor Eric Simpson.

“Do you mind if I send you some Bible verses?” Reich asked Buckner afterward.

Not at all, Buckner said.

“Now if I read something and it really hits me, I might occasionally send him something.”

Buckner has responded in kind, regularly supporting Frank and Lisa Reich’s charity, kNOT TODAY, which works with victims of human trafficking and seeks to end the sexual exploitation and abuse of children. If there’s a charity function, Buckner and his wife are there, without fail.

“(Buckner) came out of the woodwork and supported us and our charity every time,” Reich said. “Him and Ashlyn told us it meant something to them and they wanted to support us in this venture, so that was an amazing gesture. Every time we have an event, Buck will be there, and he’ll be there because he truly has a heart for children, to protect children.”

Reich is quick to note he has close relationships with players who aren’t religiously inclined, too, but there’s something special, maybe deeper, with that spiritual commonality. They share a similar view on life’s biggest questions, its greatest mysteries. Even those of us who don’t lead faith-based lives recognize the power of it.

For Buckner, the Colts’ dominant three-technique defensive tackle, the pressure was mounting. Here he was, a young husband and father of two small children, a burgeoning NFL star defensive lineman after four years in San Francisco, a man who had just been traded from the 49ers to the Colts in 2021 and awarded a massive contract to bolster Indy’s decades-long hole in the interior of the defensive line.

So many life changes.

So much pressure, borne of mammoth expectations.

Here he was from Hawaii; here was his wife, Ashlyn, from California. And now they were moving their young family halfway across the country to the Midwest. The Colts had gone all-in on Buckner, giving him a four-year, $84 million contract. Buckner is a man with broad shoulders — he’s 6-foot-7, 287 pounds — but at times, the weight of circumstances was unbearable. Especially after his first game with the Colts, when he played what he describes as one of his worst-ever games in an opening-week loss in Jacksonville.

“I felt at times when things were out of my control, I’d get crippling anxiety,” Buckner said recently.

This should have been the best time of his life. Instead, it was full of challenges: The move. The pressure that comes with being paid as one of the best tackles in the league. The new team. Not knowing teammates the way he knew them in San Francisco — at least not yet.

All the while, he felt himself needing something, and with guidance from his wife, he felt drawn to commit himself to a faith-based life. He’d been in and out of church since childhood — “one foot in and one foot out” — and now he felt himself being drawn fully back in with both feet.

“One of the biggest decisions I’ve made in my life, for sure,” Buckner said.

“Being a husband, a father, a leader of my family, I wanted to lead my family with God first,” he continued. “How could I lead if I wasn’t 100 percent committed? And honestly, I (got baptized), and it was kind of a weight off my shoulders. I felt relief. We’re all born sinners; I made some bad decisions in my life. But that moment, it felt like it all went away. Just a lightness.

“It just felt right. Like whatever decisions are made, whatever is tossed my way, I don’t have crazy reactions. I truly believe everything happens for a reason. As long as I put God first, everything will pan out. Since that day, I’ve felt a real sense of peace.”

It was the right time, the right place, especially in a new environment like Indianapolis.

“I’ve always been a person (who needs) to have control of things,” Buckner said. “Back at the time, it was the time of COVID, my son was a few months old at the time. We’d just uprooted our lives and gotten traded to a whole new team,” Buckner recalled. “I still didn’t know a lot of people even though it was October; I didn’t really have that deep relationship with my teammates at that point. I’m in an uncomfortable environment, I’m still trying to prove myself to my team, so I had a lot of pressure. I wanted to perform up to the contract the Colts gave me, so I had all these things happening in my life, a lot I couldn’t control. I was wearing a lot of hats, things tugging at me one way or the other, and I just felt I couldn’t do it alone. The timing was perfect.” 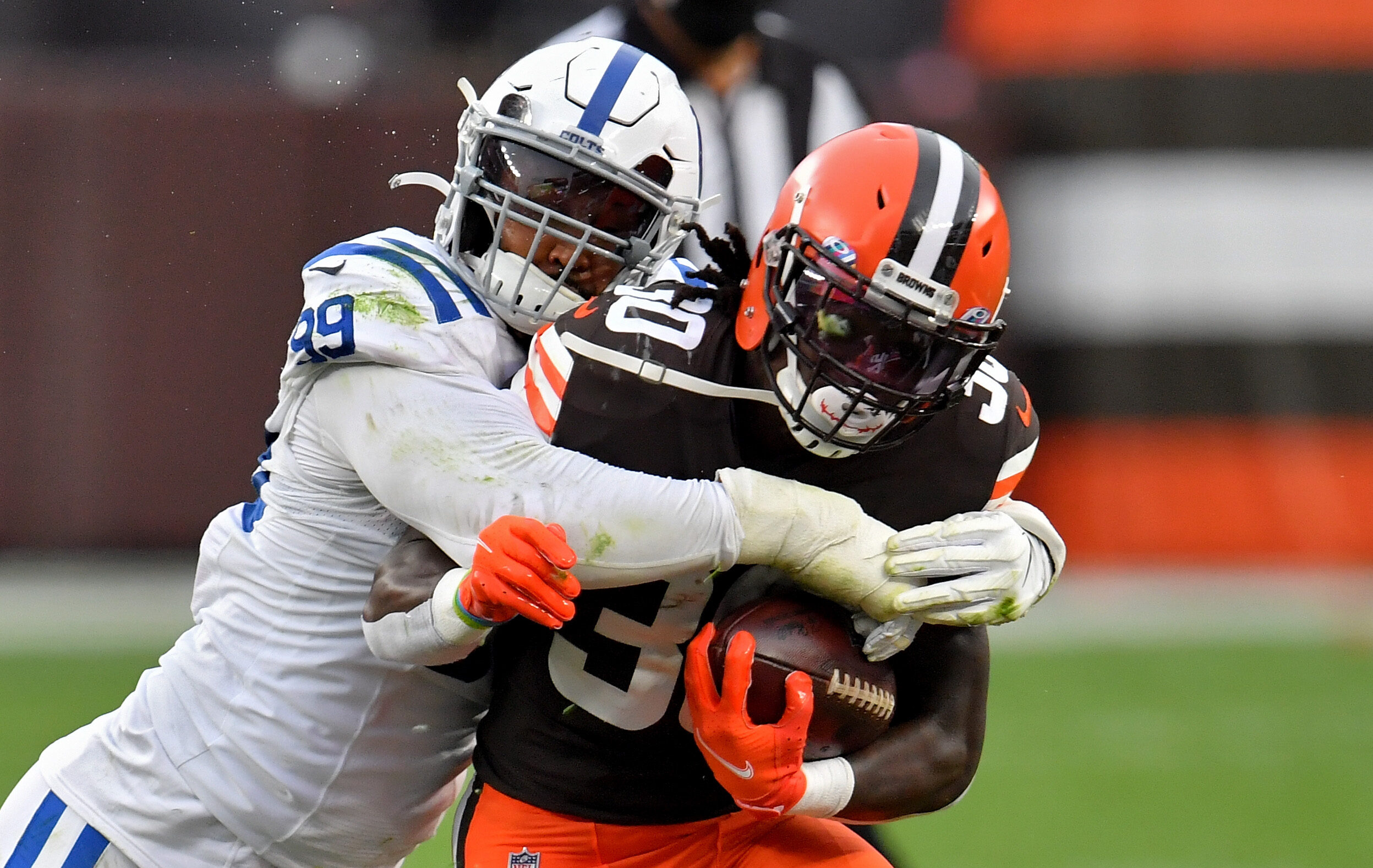 DeForest Buckner was first-team All-Pro in his first season with the Colts and a Pro Bowl selection last season. (Jason Miller / Getty Images)

He spoke about crippling anxiety. And pressure. It was all there.

“I’d never been in that position before in my career,” Buckner said. “I was always under the radar. I did some good things for the Niners, I was a household name there, but I was never recognized around the league as one of the top guys at my position. I didn’t have a spotlight on me, so I could just play.

“Coming to Indy, that was the first year when there was a spotlight on me. I had to perform with the contract and do it at a high level. Shoot, I’m human. I felt that pressure. I felt that anxiety, especially after the year started with (the loss at) Jacksonville, when I played probably one of the worst games I’ve ever played. That really hit me.

“I spoke to my wife after that game and I prayed about it, went to Minnesota and kicked off the season for myself and ended up having a great season. Then the bye week came in October, and it was the perfect opportunity to take this next step.”

Reich was baptized as a child, but like Buckner, he was committed to his faith at times and not so committed at others. Then came his senior year at the University of Maryland, when he was expected to take over as the starting quarterback with Boomer Esiason moving on to the NFL.

“Football was everything to me at the time,” Reich said. “I waited my whole career to start. Then it was my turn and I got hurt in my fourth game. I felt like my shot of playing in the NFL, my dream, was over. And I came to a point where, you know, the faith was always there, but it wasn’t until my senior year that I was broken to the point where I needed to reprioritize my life. I can’t have football at No. 1. I needed to have something at the center which will free me up for football. Something was out of order.”

Professional sports are filled with wild ebbs and flows, manic ups at down. One week you’re unbeatable, the next week you’re a bum, and the outside noise is insistent. There’s a reason so many athletes look to a religious foundation for their ballast in the game’s inevitable storms. 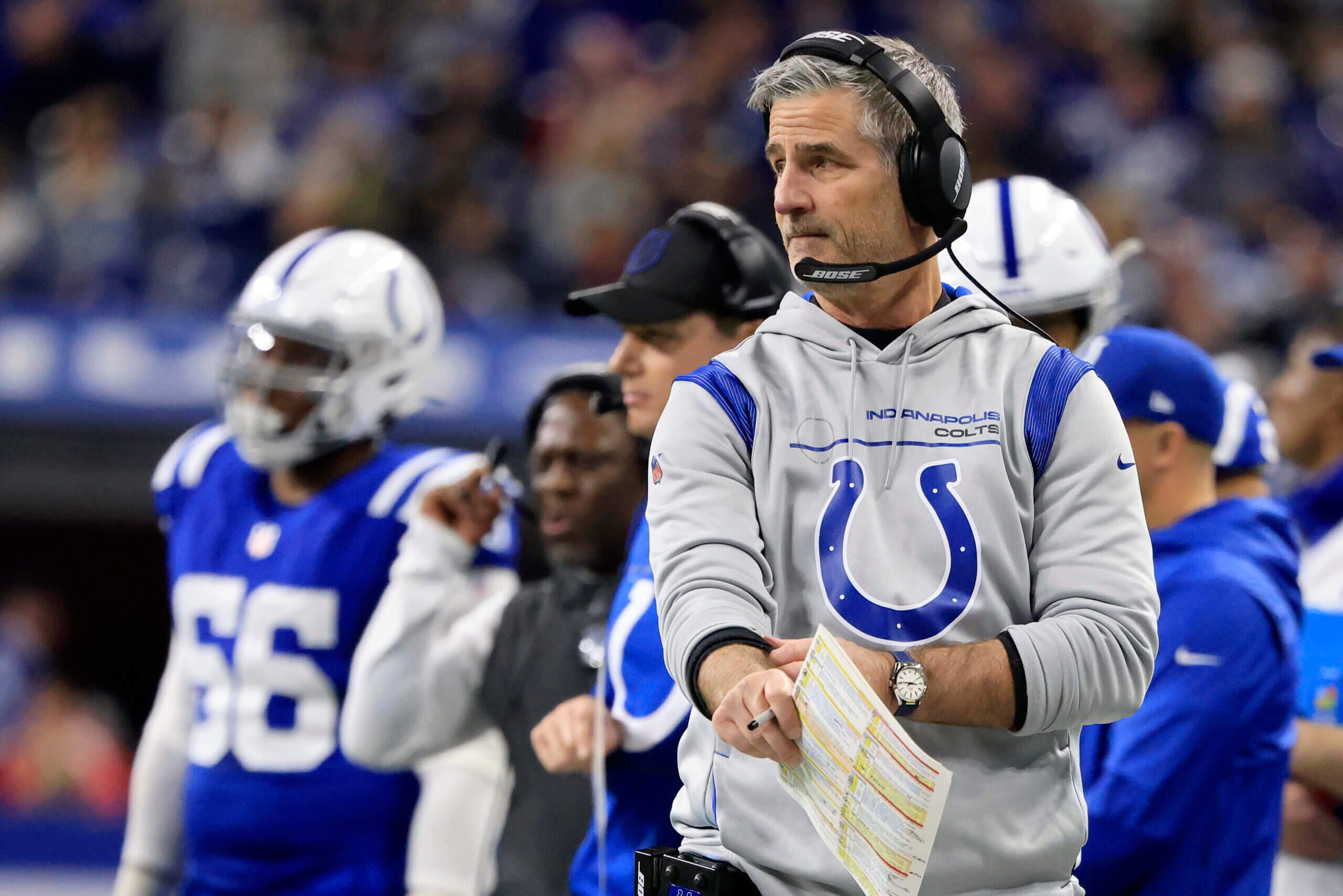 “Having your faith at the center of your life keeps you grounded,” Reich said. “This is a crazy business with a lot of emotional highs and lows. So the big part of this is where does your identity come from? … For all of us who call ourselves Christians, we say our identity starts as a child of God, that we’ve taken a step of faith toward Christ.

“For those who really wanted to put (religion) at the center of their lives, we know we mess up as much as anybody; we just have to ask forgiveness — a lot. So my identity starts there, good or bad. We’re running the table and everybody’s telling you how great you are, then you’re losing and everybody is telling you how bad you are. Good calls, bad calls, it all keeps me focused emotionally, centered, stable. I’m not thrown to and fro by the waves of public opinion. It allowed me to do my job better. … It creates a strength to deal with those things. And I’m sure Buck feels those things.”

There is one biblical passage that particularly resonates for Buckner. It is Ephesians 5:2, and he has it tattooed on his arm.

And walk in the way of love, just as Christ loved us and gave himself up for us as a fragrant offering and sacrifice to God.

This is central to Buckner’s new life. And it’s been central to Reich’s life for many years. There was no way the Colts’ head coach was going to miss this baptism. No way at all.