It was an evening of brisk departures, expected victories and surprises in the North Carolina primary election.

State of play: More than 109,000 people voted, including 43,000 who voted early, per the Mecklenburg County Board of Elections. The latter set a new record for a primary election in a non-presidential year, according to Mecklenburg Elections director Michael Dickerson.

Why it matters: You can only vote for one party in a primary, and the results determine which candidates from each party face off in November, meaning some races are essentially determined in the primary given the Democratic party dominates in Charlotte.

😳 Most likely to jump the gun: Madison Cawthorn

Now for the primary results:

Of note: Again, these are primary results. They do not reflect every name that will be on your ballot in November.

Why it matters: If Roe v. Wade is overturned and North Carolina bans abortions, it will be up to the district attorney to enforce laws passed by the state and federal officials, placing him at the center of a debate about whether to prosecute abortions.

Charlotte Mayor Vi Lyles, a Democrat who is running for her third term, will face Republican Stephanie de Sarachaga-Bilbao, a first-time candidate with a background in media and finance.

Why it matters: Expect to see new faces on council, as members like Mayor Pro Tem Julie Eiselt chose not to run for reelection.

Why it matters: If there was a race to watch, this was it, but not for the reasons we initially thought. 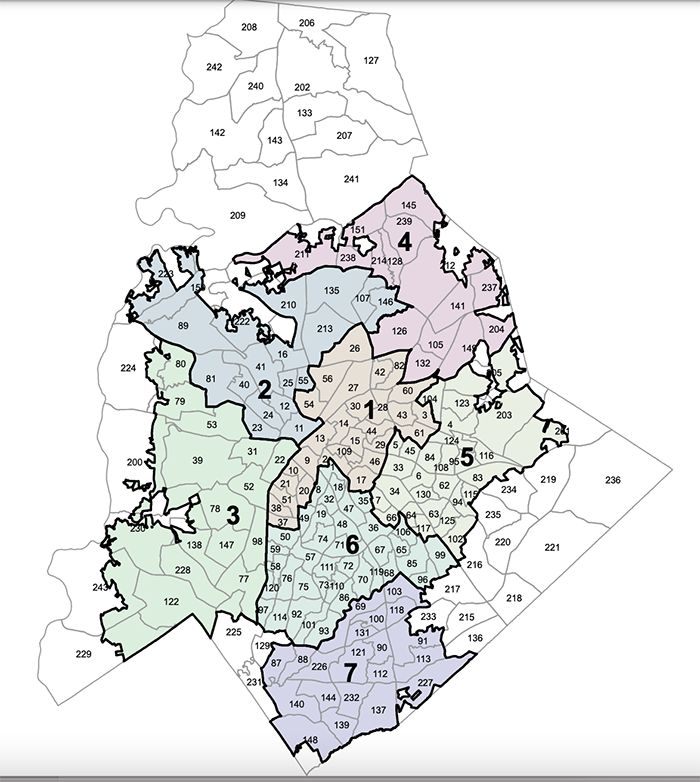 Charlotte City Council districts. Courtesy of the Mecklenburg County Board of Elections. Check your precinct location, or view a detailed map of all precincts.

District 1: It covers parts of Uptown, and neighborhoods just to the North, East and South, including Plaza Midwood, Dilworth, Druid Hills and NoDa.

District 5: Democrat Marjorie Molina, a member of the city’s Equitable Development Commission, is also unopposed in the general.

District 7: Incumbent Republican Ed Driggs will represent the Ballantyne area for another term. He faces no primary or general election opponents.

Of note: You can view an interactive map of City Council district boundaries here.

At-large: Longtime commissioner Ella Scarborough is on medical leave and will not be running for reelection.

District 6: Incumbent Susan Rodriguez-McDowell did not have an opponent in the Democratic primary, but Republican Jeremy Brasch, who previously ran for an at-large seat, beat Desiree Zapata Miller, the former president of the Mecklenburg Republican Women’s Club. 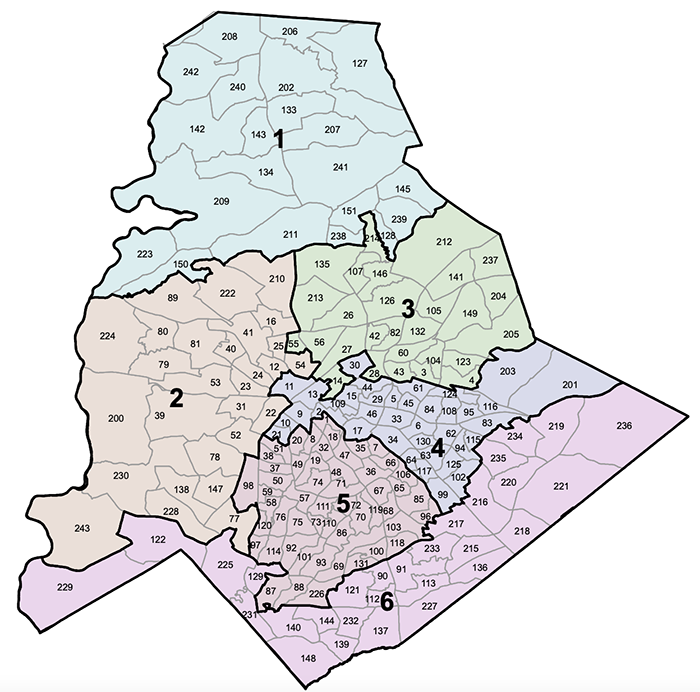 Board of County Commissioners districts. Courtesy of Mecklenburg County Board of Elections

Mecklenburg County has six state Senate districts (see printable map, and interactive map for street-level detail). Only one had multiple candidates in a primary. 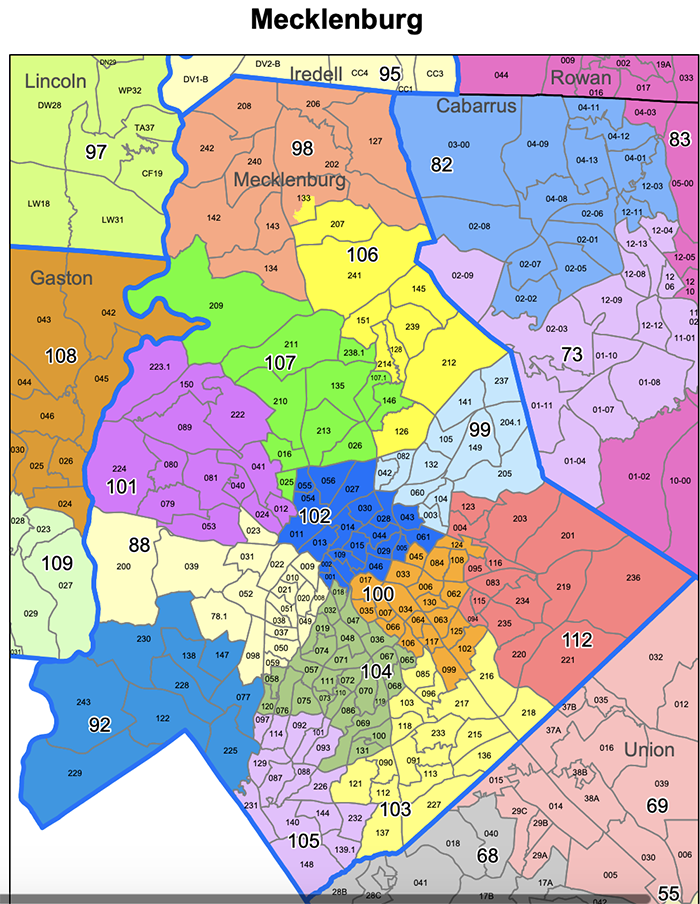 This south Charlotte/Matthews seat is being vacated by Rachel Hunt, who’s running for the state Senate seat above.

Covers north Charlotte around I-77. 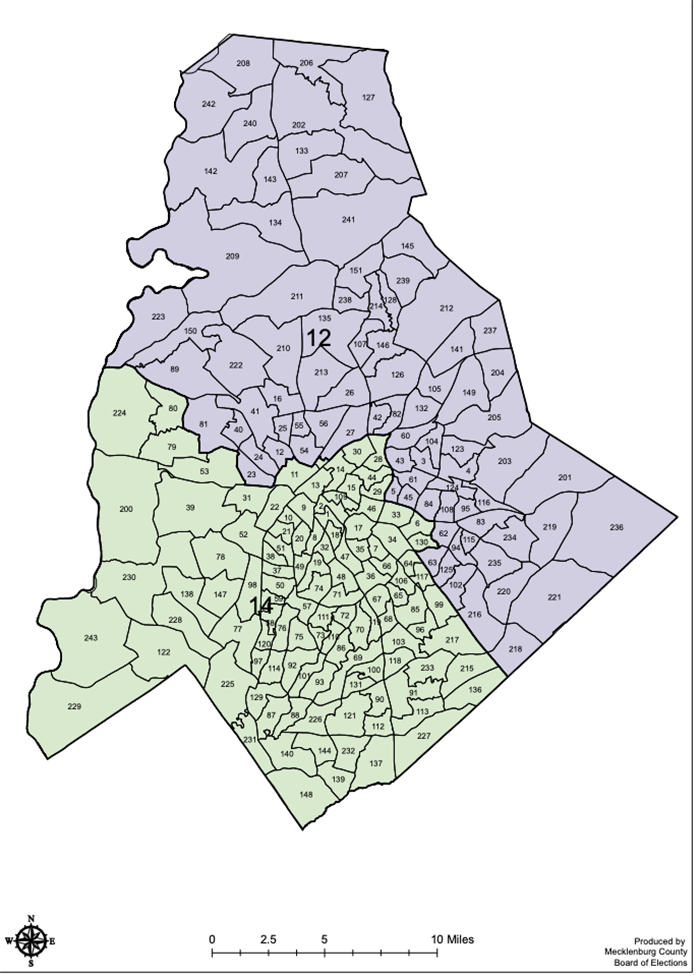 Mecklenburg’s Congressional Districts. Courtesy of the Mecklenburg County Board of Elections

Legal challenges over redistricting reshaped Charlotte-area residents’ representation in Congress, dividing the county into two districts: The 12th and the 14th.

The district, which includes north Mecklenburg County and Cabarrus County, favors Democrats, with 64% of the votes in its precincts going to President Biden in 2020.

Another Democrat-leaning district, it includes south Mecklenburg and Gaston County — 57% of the voters in its precincts favored Biden in 2020.

Democratic State Sen. Jeff Jackson, who dropped out of the U.S. Senate race late last year, will face Republican Pat Harrigan, a Hickory resident who owns a firearms manufacturing company. Both served in the military.

Seat 18: Democrat Cecila Oseguera, a bilingual Spanish speaker with two decades of experience as an attorney, beat Keith Smith. Oseguera does not have a GOP opponent for November.

Seat 05: Republican Curtis “Trey” Allen, a former Marine who was appointed general counsel for the N.C. Administrative Office of the Courts in 2021, will face Democrat Judge Sam Ervin IV, who was elected to the state Supreme Court on Nov. 4, 2014.

District 11: Michael Stading, a Republican who served as a prosecutor in Mecklenburg County and a District Court judge, and currently serves as a JAG officer in the Air Force, will face Democrat Judge Darren Jackson, who was appointed by Gov. Roy Cooper to the Court of Appeals in 2020. 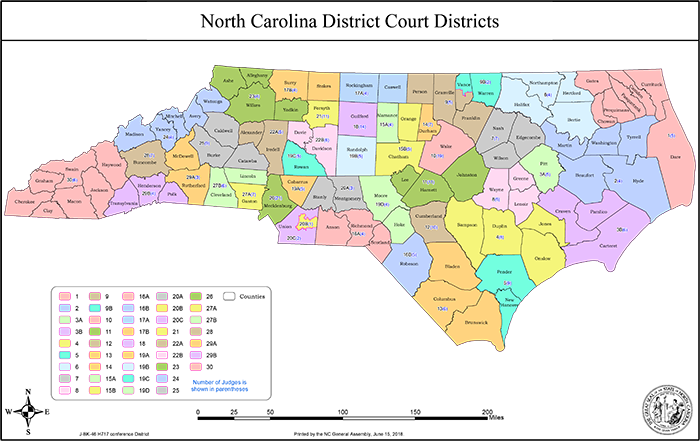 July 26: The Charlotte City Council general election was pushed back because of census delays and rescheduled for July.

Sept. 9: Absentee ballots mailed out for the general election.

Additional resources: Use voter search to check if you’re registered. 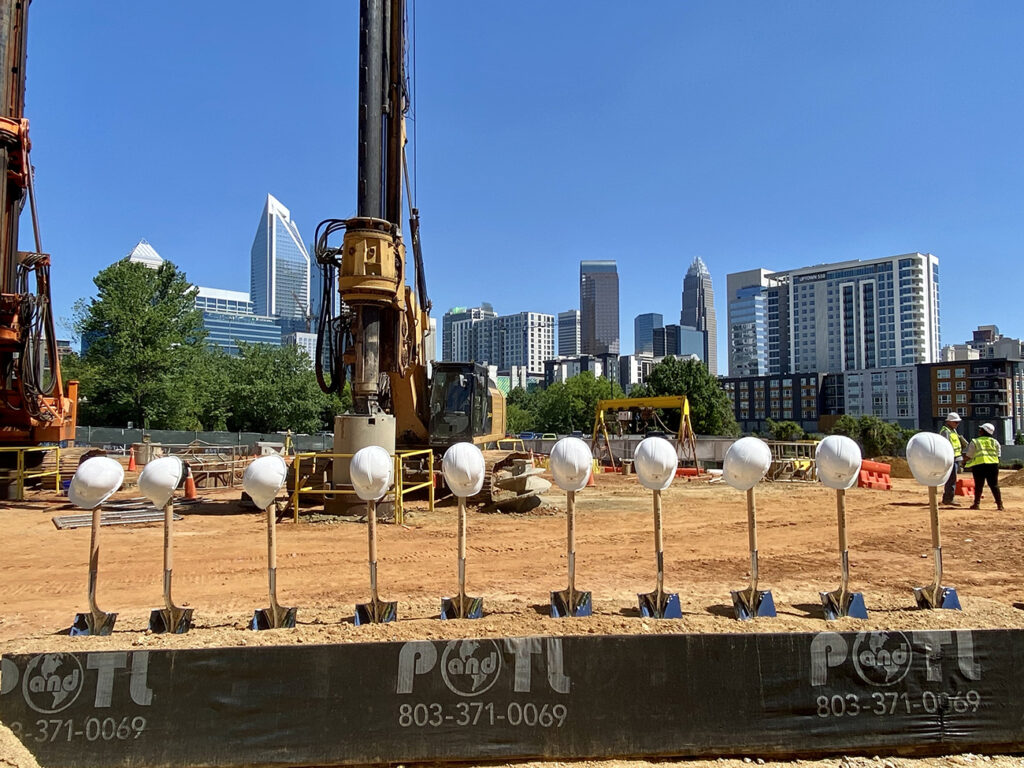